Recently my friend Tim showed me a youtube video by a few guys name Slow Mo Guys.  Basically they take random stuff and they film it in super slow motion 5,000 fps or even 10,000 fps.  First I watched these guys try to break a giant water balloon.  Then I watch a few more.  But it was the video of the guy putting out flames with a garden hose, that really got to me.  Then today I watched this one. 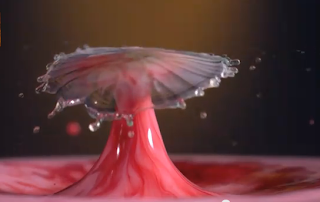 It was two droplets of color dropping into another liquid.  Again I found my self moved.  So, since this blog was originally designed to be the source or creative juice for songwriting, during seasons of writers block, here is my take away.

We often talk about eternity, and how long that is. Or how God's timing isn't our timing.  Sometimes we talk about how long it takes God to step in an act, answer a prayer or change a situation.  I've often thought when I meet him face to face, I'll ask him those questions.  Then there is the poem footprints in the sand. There are two set of footprints in the sand, they represent God walking next to me, but in the darkest times of my life there is only one set.  We have all heard the saying, that is when God carried us.  I heard one recently where the person noticed a long deep gouge in the sand with no foot prints. Then God says...."That's when I dragged you."  Man I thought that was hilarious.  But back to the timing thing.  Recently I attended a 3DM training on discipleship.  It was great.  They talked about Chronos Time and Kyros Time.  Chronos time is measured in 1,2,3,4.  Kyros time is measured in..."I had a great time"  It is like it is measured in emotion of feelings, or better yet an experience.

This is where the slowmoguys youtube videos come in.  I'm watching this guy start a fire and then put it out with a spray hose.  I found myself amazed at the beauty of the way the flames danced.  The way the water danced and met the flames and then transformed into a new dance that included smoke, mist, flame and water.  It was, to say the least, beautiful.  Then like someone splashing cold water on me they showed the video in real time.  There was an abrupt jerk back to reality. It was over in a second or two.  But at Ten Thousand Frames Per Second, it was magical.

That is when it hit me, back to reality, that was reality.  It was just a reality that I couldn't appreciate because it all happened so fast.  Kinda of like our life sometimes. I was caught in between Chronos and Kyros simultaneously.  I had an experience watching details that were previously hidden to me because of Chronos.

That is when the song idea hit.  God sees us and our lives that way all the time. When we are waiting for a painful experience to end, he is watching the beautiful collision and recognizing each and every nuance of how it will ripple out and affect not only our lives, but the lives of everyone we encounter after that.  He sees how time seems to stand still for us, as the world explodes around us.  He is never late. He just has the ability to see everything in both times simultaneously, and all the angles as well. If there was a frame speed of Eternity per second, I can't imagine what we would see. Maybe that explains some of the beauty of being in His presence.

After watching these videos, I have a desire for my 2013 new years resolution. To try and embrace the Chronos and the Kyros in the same moment.  To try and slow things down enough to see the beauty in everything and not just the end result.  And more importantly to know that my life is viewed in that aspect from the Creator of Heaven and Earth. He is truly making a beautiful collision of the here and the now and the there and the not yet.  It is His Kingdom on earth, and His Kyros with our Chronos.

I'm not sure how many make this a song yet, but I think I will "Enjoy The Time Trying, no matter how long it takes"
Posted by Charlie Hines at 1:39 PM