My Personal Experience With Gun Control

I keep seeing all these posts on gun control so I thought I would share my personal story.

My father is a retired Major General from the Army.  For you non military brats that s a Two Star General.  I’ve seen him hold his gun once, and that was early one morning in Germany when the “other” phone rang.  I hadn’t heard that ring since leaving the States.  I ran in the room to see what was going on and he was holstering it.

My brother in laws all hunt, many of my coworkers hunt as well.  I’ve fired a rifle several times in my life and held a few 9mm hand guns.  Pretty cool.  I have a pastor friend of mine that use to counsel in prisons and owns several hand guns to protect his family, as he says...I can’t win a hand to hand combat match in the middle of the night.

But here is my story.  I was living in Pittsburgh PA I had a good friend and co worker that had moved to Florida and was back visiting family. We decided to meet after work at McDonalds.  Around 9:30PM I left the mall at the top of the hill and drove down the hill to the McDonalds pictured. 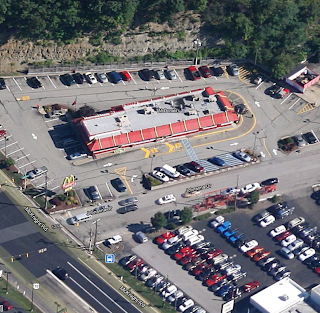 I was parked at the end of the raised portion of the parking lot about where that white van is parked.  I had my suit on and my brief case and then my friend and her baby came in.  We sat and chatted for a second and then I got up to order my food.  Not realizing that I left my wallet in my brief case back at the table in my brief case.  When I got to the front of the line, I heard the woman behind me gasp and hold in a scream.  I spun around just in time to see a tennis shoe fly past my face and over the counter.  The woman behind me had the fear of God in her face. And she was staring at what ever was behind me.

I turned around to see a handgun two inches from my face.  I looked at the gun and then looked up and saw a man with a black ski mask over his head, but all I could see was the drops of sweat that would drop from his forehead past his very wide eyes that never blinked, onto his check below that was hidden by the bottom of the mask.

Then I looked back down at the gun.  I could see the blue steel on the gun, and I could see the tips of each of the bullets in the revolver chamber waiting to be fired.  He shouted...”Get the F*** down.”  I laughed and started patting my pockets. First my chest then my pants pockets.  I remember thinking “where did I put that remote, because this channel is way too real and I would really like to change the channel right now.”

He shouted again, “I aint playin’ with you, get the F*** down.” All of the sudden it got very real.  Everyone in the store was already laying down on the ground and the staff behind the counter was screaming and crying.  I got into a runners position on all fours and thought, I can make it to the door...I’m outta here.  Just then the gunman shouted “If any of you try to leave my posse will gun you down in the parking lot.”

In that moment I surrendered and laid down on the floor.  I remember feeling the grout lines of the tile through my dress shirt and tie.  And then I felt a horrible thing. Like someone had pour glue all over me.  No, it wasn’t blood.  It was a spiritual sick feeling.  I remember thinking how easily I surrendered to someone who threatened my physical life but how I seem to dance with the devil in my spiritual life and that threatens my salvation.  I felt sick all of the sudden.

While I laid there on the floor my friend Janet took her son and hid him in the corner of a small merry go round they had in a play area.  I remember looking at her hiding.  The gunman got into the safe and cash registers while the drive through line was piling up. To the point that I could see cars directly through the window.  Why these people never looked inside to see 40 people all laying on the floor was beyond me.  You could hear people over the drive-thru yelling why no one was taking their order.  Finally the young woman with the head set flipped her mic on and said we are being held up, we would appreciate it if you would call the police.  That is when all we heard were cars pulling out of the drive-thru at drag racing speed.

The gunman then climbed back over the counter into the dining area and started waving his gun demanding wallets and jewelry.  That is when I got scared because I left my wallet at my table and if he followed me back there he would see my friend hiding and might get startled.  So I told him I didn’t have mine and he moved onto the next person.  Then he ran out of the store.  Some people started to really break down we were all still laying on the floor.

That’s when he came back into the store. That is when we thought we were all going to die.  Turn out his get-away car took off when they heard the sirens decending on McKnight road.

The gunman walked over and held the gun over the back of my hands which were covering my head.  He said “Get up brutha”  I thought maybe there is another black guy he is talking to.  I kinda lifted my head and looked. Way back in the back of the restaurant was a black guy hiding behind a chair. He was terrified and way too far away so I figured he was talking to me. I got up and he shouted “where’s your car”  and he put the gun in my back and we headed outside.  I heard my friend Janet cry “He is taking Charlie.”  Walked outside and by that time even I could hear the sirens.  The gunman got really nervous and began to walk faster than I did until his arm holding the gun was ahead of me. I thought I could bring my arm down on the gun, use my elbow to break his nose, then kick his leg out from under him and slam his head into the ground on the way down...............Yeah, none of that happened.  I whimped out.

The gunman told me “Get in the car”  that is where I kinda drew the line.  I said, you don’t need me, here take the car.  I handed him the keys and he spun around put the gun in my face again and said “Run”  I thought about bobbing and weaving, but no, I turned so fast to run that I pulled every ligament in both my knees.  I ran straight up to the security booth for the apartment complex at the top of the hill.  I ran through the door and the blinds and scared the crap out of the booth attendant.  I yelled call the police, and he said I did already.  So I stepped back out of the both just in time to see a car at the red light at the bottom of the hill. I thought this is the dumbest criminal ever to wait for the light to turn green.

That’s when I noticed my car was still in the parking lot, wipers going, lights flashing.  Turns out the Gunman couldn’t drive a stick shift. that’s when he jumped over the retaining wall and landed about 8’ down on the road right in front of the police car.  The officer got out stood behind his door and drew his weapon. The gunman fired and the officer fired back and I’m standing behind the gunman up the hill right in the line of fire.
Thinking I’m about to get shot, I dove into some juniper bushes near the apartment security booth.

The cops found him, and because he took his mask off outside they brought him to me to identify.  I did and that was that.  In court later he was charged with 27 counts of armed robbery because he had a gun in his hand when he asked all those people for the wallets one at a time.

So here is my feeling on Gun Control, if you can keep them out of the hands of those type of people go for it.  But if someone breaks in my house in the middle of the night, last time I checked I’m no Liam Neesom, so I will need as much fire power as I can to win that fight.

Funny thing though, after my robbery and carjacking all in the same night.  I didn’t buy a gun.  I couldn’t eat inside a restaurant for years after that.  I still have a hard time watching black and white video of security cameras when they catch a robbery because I’ve never seen any actor act the actual fear that happens in that situation.

Yes I want my kids safe, and I often had daydreams when my kids started attending at the same school my wife teaches in, because my entire family is in one place.

I push back that fear all the time but if they want to hire a police officer that’s packing, I would be totally cool with that.  I still think they only thing that stops a crazy man with a gun....any type of gun. Is a sane person with an equal or bigger gun.

Maybe that is the military brat in me, but that’s my personal experience with guns.  Feel free to discuss.
Posted by Charlie Hines at 4:00 PM